Several months ago an announcement that I would be producing the next season of "The Master's Metal (Podcast)" was made on several social media outlets.  I was overwhelmed with messages of encouragement and excitement from many of you here with the Christian Metal Realm, as well as other social media locations!

Each episode will now cover a two year period (instead of five years, as with the former shows).  This new format now allows the option to feature additional songs from artists/bands who released more than one album in that time span!

I will be sharing further updates with you as we arrive closer to a release date! 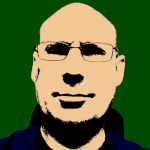