I have been a buyer / seller on eBay since 1998, and while there have always been a certain number of jerks on it, I can't remember ever having a time where there are this many.


More and more sellers stating that an item is "like new", only to get it and it looks like it has been stomped on, thrown around, and left in the backyard for weeks.

Even with all the steps eBay has made to try and stop it, counterfeit items are all over the place.


Buyers don't seem to want to take the time to leave feedback anymore when they have had a positive experience (I have never had negative feedback in over 20 years of buying/selling on eBay). Sellers count on that feedback to help promote their business, but this generation doesn't seem to respect that. Other sellers have noticed this too, and some no longer leave the buyer feedback until the buyer leaves them feedback.


Have you guys noticed any downward trends on eBay?

I mostly buy and somewhat regularly get no feedback from the seller...have two I'm waiting to see if they will reciprocate with positive feedback at this time.

I try to not care when they don't give feedback but I'm usually annoyed at first then I remind myself not to care about it...

crucifyd wrote:I try to not care when they don't give feedback but I'm usually annoyed at first then I remind myself not to care about it...

Hahahaha...that's awesome. I really need to do a better job of reminding myself to do that

eBay has been bittersweet over the years. But I agree, the novelty has worn.
It has been exciting and maddening.

Yeah, seems like many just don't care anymore. Sad reality is that most of the seller business has been "outsourced" to China, LOL. I just don't see how they can offer such low prices AND free shipping. But oversees sellers seem to try harder nowadays. As a seller I am often times dumbfounded at the increased shipping costs and eBay's inaccurate shipping calculator. Then there is the seller fees.

I could go on 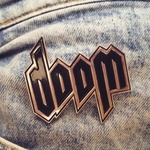 Yeah, it's hard to believe it has been almost 21 years 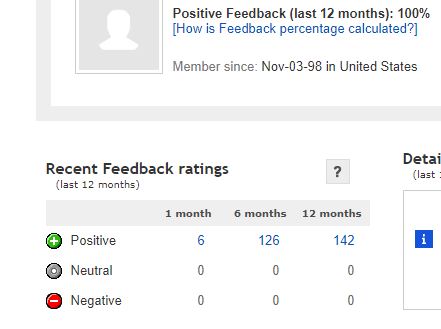 Been a while since I sold anything. I used to sell a ton of records. Duplicate copies or stuff I didn't want. people at work used to give me their records if I made them into CD's. Been a while since I have done that but I think I have cleaned all my fellow employees out. I would tell them "I won't pay for your records but I'll make you CD copies" and all of them were happy just to get rid of them. Some of them were kind of rare, one I sold for around 50 bucks. Most of the stuff I listed as "buy now" but those that were rare I let the bidding wars start. Sometimes people would leave feedback, sometimes not. I always do when I buy from eBay but it was been over a year since i bought anything or sold anything.

Dang, I haven't bought anything from Ebay in several years.  I had a bad experience with someone selling me some bootleg cdrs.  I reported the seller but it looked like nothing was done about it (I know others had to have reported him too).  That wasn't even the reason I left, I just got tired of either being sniped at the last minute on something, or else feeling like I bid too much just to get what I wanted.
I buy most of my used music from Amazon sellers now (and have had great experiences with pretty much all of them).  Just a little tired of paying $4.99 S&H.

We (my wife and I) have given up selling on ebay. Too many people winning the bid and then not paying even after days/weeks of back and forth with promises to pay.

Has become a waste of time. Now we sell with Facebook marketplace.

Yes, grading of CD's is so random. I don't mind when people under grade (and that is a pleasant surprise and gets very positive feedback) but the as new/no marks and it looks like it has been used as a drinks coaster is so annoying.

I don't shop on eBay much anymore, either.  When I do, I most of the time forget to leave feedback.  I got my stuff, and that is all that is required.

Maybe eBay could change their system where, if there is no reported interactions with the seller after the sale for refunds or fixing bad merch, then they would automatically give you a good rating after some predetermined time had passed.  It's just a thought.

alldatndensum wrote: if there is no reported interactions with the seller after the sale for refunds or fixing bad merch, then they would automatically give you a good rating after some predetermined time had passed.  It's just a thought.

That's not a bad idea.

The last thing I bought on ebay was The Six Million Dollar Man Season 4 DVD's because it was much cheaper buying it used than new from anywhere else. That was over a year ago.

I have been an Ebay member since 1999, used to do a lot of selling and buying.  Then for a decade or so I was not active, until recently.

I share some of the pet peeves that were mentioned.  The below would be a few of my biggest ones as both a buyer and seller:

Just got a few DVDs rated "Very Good" but they were Fair/Good at best.  One double-DVD set had a very beat-up, torn slip cover that can't be replaced.  I would have returned it except that I got it cheap in a Lot.

Twice in the past 6 months I purchased some equipment and the seller told me they had to cancel the auction because they "couldn't find the item" or the item "was not in the condition specified."  Yeah, sure.  Meanwhile, I not only spent over an hour with one auction making sure I'd have the winning bid, but I also used a coupon that Ebay had given me and that expired by the time the auction was over.  I had to waste more time calling Ebay to get another coupon.

Yep.  I sold 4 items recently where the buyer left no feedback even though I left some for them.  It's even more maddening when it happens on Amazon, as I sell so few items there and have yet to get any feedback at all from a buyer even though I ask them nicely to leave some.

There are tons of counterfeit products on Ebay, especially from Russia and Greece.  Lots of bootlegged CD's and band t-shirts.   It's so obvious what these are, so i don't see how Ebay does not notice this.

Ebay just changed their listing steps and process recently, and it is a pain to have to go through more steps just to list an item.

This is my biggest pet peeve of all.   There are no longer any real bargains!   There used to be so many when Ebay was still young and new.  Now, you are often going to pay more than what the comparable product might go for on Amazon or another site.  That's no fun at all.